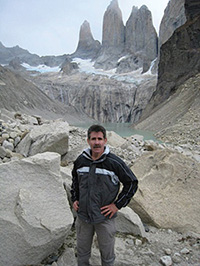 Marty Kallish, an active runner and former Marine, shares his journey with lung cancer and how clinical trials and targeted therapies have changed his outlook.

Clinical trials are critical to developing and improving treatments for lung cancer patients. Successful trials have brought about numerous scientific breakthroughs that have made it possible for physicians to offer advanced targeted therapies to patients, and give those facing a lung cancer diagnosis the gift of more time.

No one understands the importance of clinical trials more than Marty Kallish. Marty, an active runner and former Marine, was diagnosed with stage 4 lung cancer in 2008 when a chest X-ray revealed multiple tumors.

As he faced the uncertainty of the disease, Marty’s former military training helped him mentally prepare for what lay ahead. He began taking control of what he could in the way of his treatment — reading up on his diagnosis, preparing questions for his physicians, and asking for second opinions. Marty and his doctors explored all options, including new targeted therapies just becoming available to patients.

At the time of Marty’s initial diagnosis, a drug called erlotinib (Tarceva®) had just completed a successful clinical trial, making it one of the first targeted therapies for advanced non-small cell lung cancer patients with a specific genetic mutation. The end result of this trial translated to hope for thousands of people living with lung cancer.

Thanks to the recommendation of his physicians, Marty was able to benefit from these advances in research. For him, the new treatment meant years of improved health and breathing, years of clear scans, and years to fill with moments like seeing his daughter walk down the aisle and holding his grandbabies. Marty was even able to fulfill one of his lifelong dreams, making the 18,000-foot trek to Mt. Everest basecamp with his bottle of erlotinib in tow — the treatment he believes made it all possible.

Marty is currently enrolled in a new trial focused on immunotherapy. He says, “During the past six years I have seen amazing progress with targeted therapy, not only in lung cancer but for all cancers.” His story is but one example of why building momentum behind research and clinical trials remains one of the most definitive ways to double lung cancer survival.

Unfortunately, many barriers stand in the path of clinical trials and their success in improving quality of life and extending time for lung cancer patients. Some of the greatest barriers are inadequate funding, low participation rates and lack of awareness by both patients and physicians. Clinical trials are expensive to perform; it often requires millions of dollars to get off the ground. Even when funding for these projects is available, researchers struggle to raise awareness about the trial and to find patients who are willing and able to participate – it is estimated as many as 80 percent of trials experience delays due to lack of enrollment — delays that slow down the progress of research.

Overcoming these obstacles will be a fundamental task as we look to progress our vision. Free to Breathe is hard at work to double the number of lung cancer patients enrolled in clinical trials.

From funding a Clinical Trial Innovation Prize to supporting ideas that will determine the best way to build participation, our evolved programmatic focus will help jumpstart accrual and give more treatment options to patients like Marty.

Marty just celebrated his sixth year as a lung cancer survivor. While lung cancer continues to be something he’s living with, Marty’s outlook remains positive and he refuses to give up. His hope is that more lung cancer patients and families will have the opportunity to learn about and participate in clinical trials that prompt researchers to uncover the next scientific breakthrough in lung cancer treatment. “There are people working every day to develop new drugs and new therapies and one of them, no matter how bad you feel, could be the one that saves your life.”

HELP US build momentum behind clinical trials, like the ones that helped Marty Kallish.

Try EmergingMed’s Clinical Trial Matching Service. You can be matched with clinical trials you may be eligible for based on your specific profile.